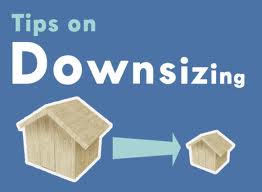 Why most sellers are downsizing!

More homemovers are looking to downsize their property than move to a bigger, more expensive home, according to a new report from Lloyds TSB.

The lender surveyed 1,000 people and found that a majority – 51% - cited downsizing as the main reason for selling their home, compared to only 22% of sellers looking to move to a larger property.

This goes against the accepted norm of buying a modest home to get on the first rung of the ladder, and then gradually working your way up to a larger family home. Now it seems that at some point many of us are deciding to come right back down again.

"We have seen a gradual increase in the number of sellers looking to move to a smaller property, and this seems to have accelerated over the last few years, as property prices have slowed down," he explains.

What is even more surprising is that is isn't just older people that are downsizing to more manageable homes like bungalows, but younger couples and families are also switching from large detached properties into cheaper, smaller abodes. In fact 21% of respondents to the Lloyds TSB survey said they are choosing to downsize much earlier than they had expected they would do.

Why downsize?
Downsizing simply means moving to a smaller home, but it can also refer to trading down to a cheaper property, regardless of the size.

Traditionally it has been a move made by pensioners when they reach a stage of their lives where it becomes difficult to manage the upkeep of a large family home, particularly if they have impaired mobility. As people are now living longer, it makes sense that downsizing for this reason would have increased (and will continue to).

By downsizing to a smaller home, such as a bungalow or retirement flat, they have no stairs to manage and maintenance is much less of a challenge.

According to Lloyds TSB, six out of 10 downsizers are trading down simply to find a place that better suits their circumstances. Unsurprisingly, over 60% are over-55%.

Access your cash
But financial issues are playing a bigger role in the motivation for people to downsize too.

A large proportion of downsizers – two fifths – do so to release some of the equity tied up in their home.

For example, if you own a property worth £300,000 outright and you trade down to a smaller home worth £200,000 you can release £100,000. In addition your running costs will probably be significantly lower on your new, smaller home – a money-saving motivation for a third of downsizers.

In fact, the new report suggests that the typical windfall from downsizing is £100,000, based on a homeowner downsizing from a detached house to a bungalow, and this sum has risen by 40% in the last 10 years. Londoners unsurprisingly see the highest windfall from trading down, pocketing a whopping average £270,000 when they downsize.

When you consider the UK's massive pension gap, it is unsurprising that so many are motivated to access such a sizeable sum of money in their later years.

Mellor adds: "Some people with high value property think now is a good time to downsize in order to realise their equity, because more recently the value of their existing home hasn't risen as rapidly in value as has been the case in the past.

"More importantly for many is the fact that the cost of running a home is much higher now than it was 10 years ago. Every increase in household costs is compounded, from Council Tax to energy bills, and this has proved a catalyst for the downsizing trend."

Jonathan Harris, director of mortgage broker Anderson Harris, agrees: "Sadly, more people are having to downsize because they simply can't afford to live in their home, rather than because they are empty nesters and have too much space now that kids have flown the nest."

Homeowners at different stages of the property ladder are also looking to downsize to a smaller property in the next three years. Almost half (49%) of homeowners living in their second home are considering trading down, as well as 61% of homeowners in their third home and the same number (61%) in their fourth home.

Stephen Noakes, mortgage director at Lloyds TSB, says: "We are starting to see homeowners on different stages of the property ladder considering it as a sensible option as more and more families are looking at ways to save money."

Mellor agrees that a much broader range of buyers are looking to downsize: "Traditionally, downsizers were older people who were finding it hard to manage a larger home, but we have definitely noticed a shift in recent years.

"We now see plenty of younger, pre-retirement sellers, whose children have moved out; thinking now is a good time to downsize. It means they can release equity to put towards holidays or invest in property for the rental market or to add to their pension fund, as well as reduce their overheads."

So when you plan your next home, remember to look down the ladder as well as up. You might just find a great small home that offers everything you need, provides you with a windfall, and saves you money over the long term.