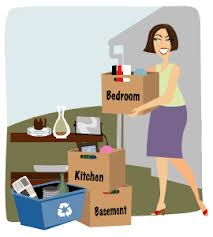 Later this year, Kirsten Shaw and her family will move into the house of her dreams. It's taking shape—all 130 square feet of it—right now on a flatbed trailer in her Calgary backyard. Shaw, her husband and 12-year-old son will squeeze into the wee quarters and spend the winter and begin transforming a trailer into what will, eventually, become a (relatively) spacious 200-square-foot dwelling.

After that, they'll tow their tiny homes on wheels across the continent—the family's first holiday in years—then park it on a plot of land her husband owns on Vancouver Island, where they will settle down. (Follow their progress on the Facebook page Tiny House Calgary.) Shaw says she and her family are done with living large. They live in a rented 2,200-square-foot home filled with "stuff" she doesn't like or use.

Moving into such tiny quarters will dramatically reduce the couple's monthly bills, giving them more disposable income, allowing them to work less and spend more time with their family. Her husband's three boys, a 12-year-old and 15-year-old twins from an earlier marriage, will join them, too.

Kirsten Shaw and her husband, Michael Hunt, have begun construction of a tiny home on the trailer bed of this 1981 International Truck. The couple plan to tow this and a second, slightly larger home to a plot of land in B.C.

Stuffing a family into living quarters this small might seem extreme, but it's part of trend that began nearly a decade ago in the United States. Its proponents argue that people don't need large quarters to live comfortable lives. In anything, they say their lives could be richer—literally—if they stopped spending large chunks of their incomes on shelter.

Sound cramped? Shaw says it's her current house that's narrowed her life and eats up paycheques.

"We've never really been able to provide any kind of fun for them because it's all work and no play," says Shaw, 40, who works at a health food store. Her husband is a building contractor. "We want to have some fun. We don't have too many more years left with our kids."

She got the idea from a friend who showed her photos of some very wee homes built in the U.S. After some long talks with her husband, the couple decided to build a small house of their own. "We're both just very done with the excesses of life," she says. "We're tired of paying it to the man and we have nothing to show for it."

In 2002, a group of friends in Iowa set up the Small House Society to promote and field interest in small homes. It hosted web discussions, offered workshops on how to build an undersized home and posted real estate listings. Interest spiked after the 2008 recession and housing crisis.

In the States, thousands of homeowners have downsized into houses that could fit into their former garages. They come in all shapes, from one-room shacks to custom-built beach houses to little homes on wheels. Many are marvels of engineering with hide-a-beds and storage space beneath the floorboards.

In Canada, the number of small homeowners is lower, but interest is high. Architects who have designed custom-built, undersized homes say the public is thirsting for small, affordable single-family homes.

"I think a lot of us have stuff overload," says Cathy Garrido, a partner in a Toronto architect firm, Sustain Design Studio, which designs mini-homes. "You get to a point where you think, 'Who needs it?'"

The architects at Sustain Design Studio had hoped to see small homes catch on in Canadian cities but were ground down by the municipal laws that discourage small, single-family homes. The firm has sold seven—one went to Florida, and the rest are in Ontario cottage country—over the last decade.

The lead architect, Andy Thomson, became so discouraged he quit to run an eco-friendly campground in neighbouring Quebec.

In Canada, Thomson says few municipalities permit single-family houses that are less than 700 square feet. "Even if you design to the best practices possible professionally and ecologically and every other way, it might not be allowed," Thomson says.

It wasn't always like this. In fact, up until the early part of the 20th century, most middle-classed North Americans lived in close quarters. Family homes and apartments were, on average, about 800 square feet. But after the Second World War, housing demands changed, says Avi Friedman, a professor of architecture at McGill University.

Canada doesn't keep statistics on the square footage of homes, but census gatherers do track room numbers, which increased from 5.3 in 1961 to 6.4 in 2006.

Other factors conspired to make houses larger, too. For smaller municipalities with little industry, property taxes became a chief source of income, and assessments were tied to house size. They amended zoning laws that set minimums on house sizes. Most of those ubiquitous, tiny, post-war era homes that dotted the Canadian landscape 60 years ago would not be permitted today.

But the recession, combined with the housing crisis in the U.S., which saw millions of people lose their homes, has reignited the debate about how much space we actually need.

"I think people do want less, less consumption, less emissions, less headaches," says Jay Shafer, a founding member of the Small House Society. Shafer, who designs mini-homes, lives with his wife and two kids in a 500-square-foot house in Sonoma, Calif., a pricey town that would be otherwise unaffordable were he not living in a tiny house.

"I can work less. Suddenly, there is this sense of freedom that you get. Everything is about freedom down here in the United States and yet we're still not free to live the way we want to. "This paradigm... that bigger is always better, is starting to wear a little thin—for a lot of people, anyway."

Shafer hasn't lived in anything bigger than his current home since leaving his parents' for university. He designs small houses and travels the continent hosting workshops to people interested in building a little house of their own.

Generally, they're people who are tired of the cost of maintaining larger homes and those who want to reduce the impact their homes have on the environment.

The end of the McMansion?

In recent years, Shafer says many U.S. municipalities have eased their zoning regulations to permit smaller houses, like the so-called laneway homes, which are smaller, self-contained units typically placed in backyards.

But there are practical drawbacks to building a wee house in a big city, where most Canadians live. The high price of land, for one, would defeat the purpose of shedding housing costs from a monthly budget.

And densely built city neighbourhoods like Toronto's don't have the yard size or enough back lanes to accommodate secondary houses on a property.

Friedman argues that demographic changes will soon force municipalities to change their bias against small dwellings. The public's desire for smaller homes is already apparent in the condominium boom in Canadian cities.

People are prepared to live in small apartment units. Soon, those buyers—the singles, couples and empty nesters—might want to live small, but with a yard too.

Friedman, who was raised in Israel, spent the first 10 years of his life in a one-bedroom apartment. His parents slept on a pullout couch and he shared a bedroom with his sister. They later moved to a "spacious" 800-square-foot house. It was all the family needed.

"People, a family of four, can live very comfortably in a dwelling under 1,000 square feet," he says.